Cloud native is the perfect recipe for innovation, adaptability and engineering excellence – when it goes right. When it’s not right, it can be a monster spaghetti, a quality headache, and frustratingly inflexible. Why so negative?

Note: Here and there I’ve added my own observations in an italic paragraph or when notes takes up several paragraphs in between horizontal rules.

These are my scary stories

Summarising Twitter thread about the talk by Sara Dufour (@ComSaraDufour)

First problem: what is even Cloud Native?

??? lots of small services, the platform is smart and the services are dumb ???

Still does not feel right to me 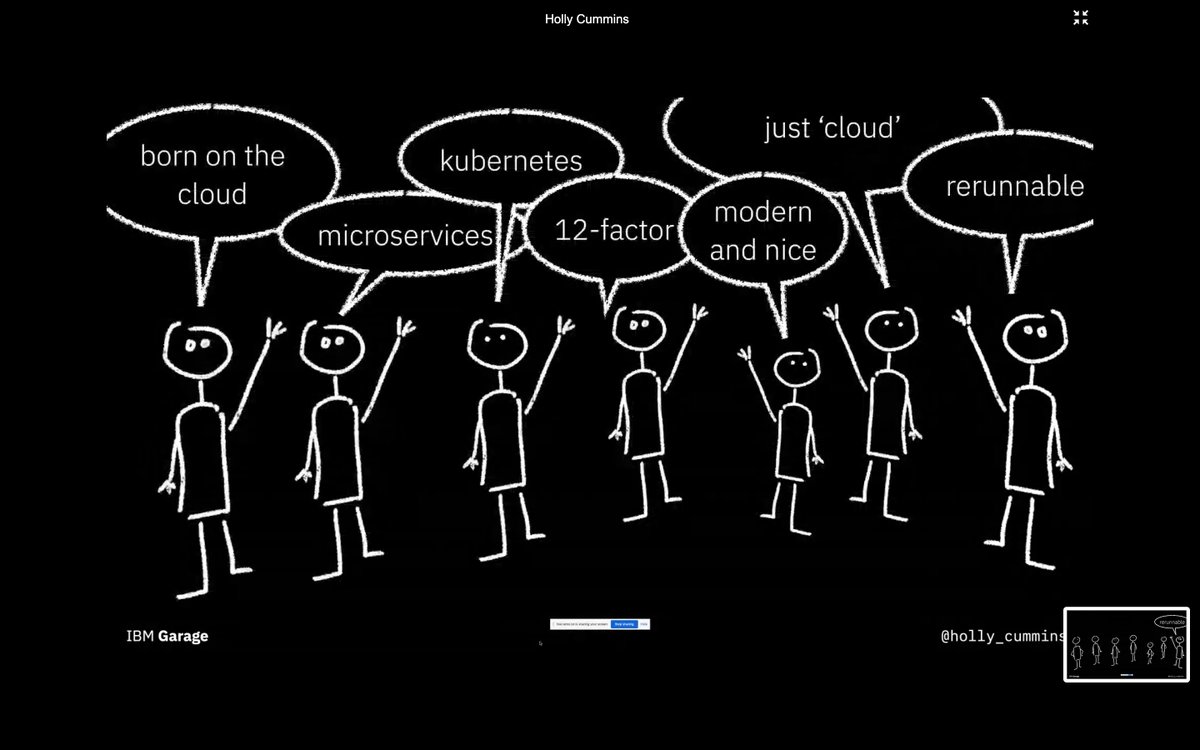 Some people will say:

What is Cloud Native not? it is not a synonym for ‘micro-services’

So WHAT does “cloud native” actually mean? Everyone has their definition.

” If #cloud native has to be a synonym for anything, it should be ‘idempotent’*. “

* That’s latin for “having the same power”. (I knew this literary background would come in handy someday) – Sara Dufour (@ComSaraDufour), Nov 20, 2020

Bottom line is: something that allows you to “make high-impact changes frequently & predictably with minimal toil, to build great products faster”. #ProductManagement

what problem are we trying to solve?

everyone else is doing it?

But very often, a #transformation is social-driven: “everyone’s doing it so we should too”. Many orgs know they want to be CN but don’t know what pb to solve.

And just as anything else, a copy-paste from another organization won’t work —it’s just wishful mimicry. #frametheproblem #customize #flowcon

Why do we even want to go to the cloud?

cost reason: running in the cloud used to be cheaper

It turns out many people when they first moved to the cloud, they got electrocuted.

=> 2011: 12-factors: how to write a cloud native application without being electrocuted

Cloud Native in 2010 was about: here are the things to do to not get electrocuted when running in the cloud

where now Cloud Native is mostly limited to:

It does seem perverse that Cloud Native, which I thought origins just implied ‘built to operate in cloud infrastructure’ as opposed to say, ‘lift-and-shift from a data centre’, now means ‘runs on Kubernetes.’. – Ian Cooper (@ICooper) Nov 20, 2020

So … there are so many definitions

Are we all going to agree on the goal?

=> lots of opportunity for confusion

Example: you go to the stakeholders with this cloud native solution

=> we get more opportunities for problems …

micro-services are not the goal, they are the means.

we’re going too slowly. we need to get rid of COBOL and make micro-services!

… but our release board only meets twice a year

Containers are a good base. But number of containers !!??? It’s not a competition to see how many you can have

reasons not to do micro-services

but the problem was: the domain model was common over all the micro-services => a shared library might have been a better approach in this case (though an anti pattern for micro-services)

The Mars explorer: instead of going around Mars it went into Mars

distributing did not help

pretty rare in our industry:

when the confidence is not there that they will work together, you get …

I’ll merge my branch in our CI next week …

that is not continuous …

It could be #ContinuousDelivery if your product demand is really 6 months. If it is, you have a constraint in sales/marketing more serious than technology

It could also be your perception of product demand is flawed, and one way to test that would be releasing features more frequently

How often should you integrate?

there is a spectrum

trunk-based development: you integrate at least once a day 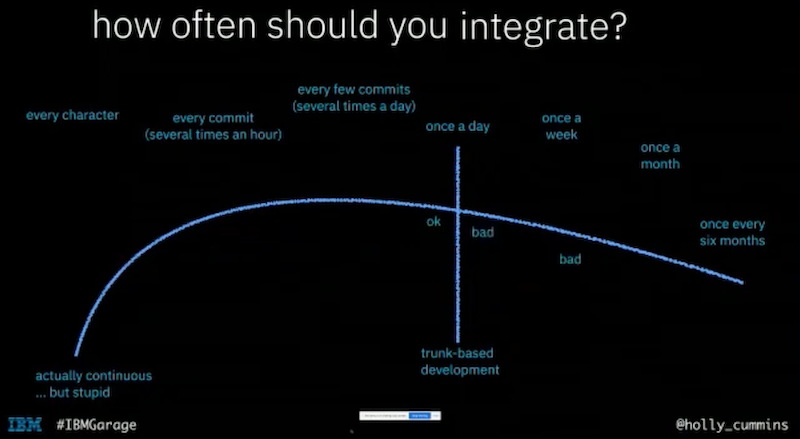 my fit is: you integrate every few commits

How often should you release?

there is also a spectrum 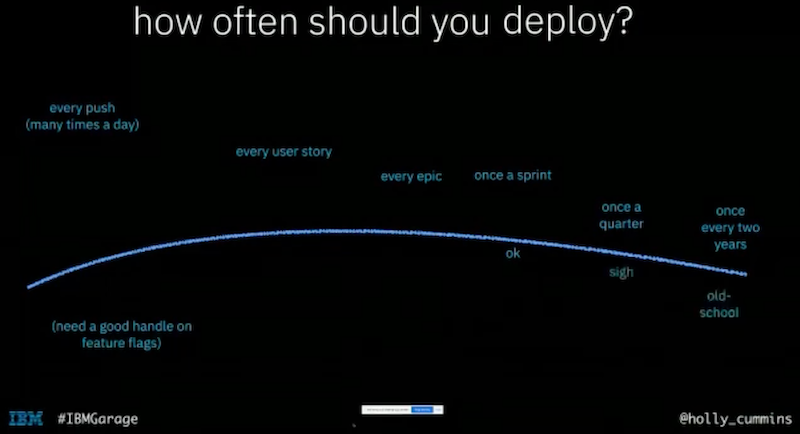 if you are going to deploy on every push, you will need a very good handle on feature flags

best practice: release once every sprint, anything less than that is old-school, anything more than that is great, every push is pretty hard core skills, every user story is slightly more attainable goal

How often should you test in staging?

there is not really a spectrum on that -> continuously, on every push

We can’t release? But why? Why can’t you deploy more often?

often it comes down to that micro-services issue, the goal is independently deployable

but some organisations deploy them all at the same time:

we can’t release this microservice …

we deploy all our micro-services at the same time.

we can’t ship until every feature is complete

it is ok to get stuff out to get the feedback

The point of Cloud Native is … speed

What’s the point of an architecture that is expensive and that enable you to go faster if you don’t go faster?

=> you don’t get feedback

when driving a car, you never drive with your eyes closed however we often deliver software like that, we work for months without getting any feedback

If it is too scary to deploy? use deferred wiring, use feature toggles, use A/B tests, use canary deploys

often why these things don’t happen is because of …

our tests are not automated

=> we have to perform a long, manual QA because the tests are not automated

this actually means: we don’t know if our code works

your code may work, may be perfect, but a dependency might have changed and can change behaviour

that lack of confidence stops orgs from shipping

we don’t know when the build is broken

if you don’t have that, and the build breaks, and it stays broken and everybody thinks it is someone else’s problem

oh yes, that build has been broken for a few weeks …

why don’t we fix it, it stops giving useful information when it is always red

systems are going to behave in unexpected ways

with micro-services you need to have these automated contract tests

it takes us a week to start coding

companies put so much Governance around cloud

this provisioner software is broken

with this provisioning tool you can spin VMs in seconds then they come back and tell us, it does not work, it takes 3 months to provision something 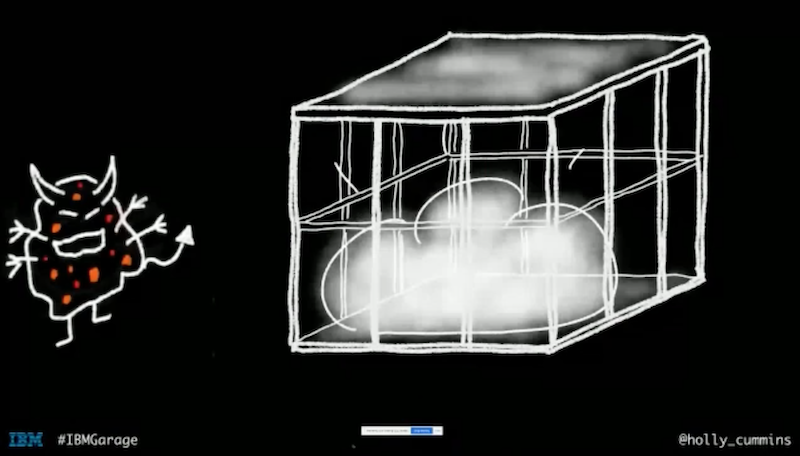 changing cloud provider because it took so long to provision because of the internal procurement process, the problem is not with your provider but with your internal structures

A locked-down totally rigid inflexible un-cloudy #cloud is not a good option.

If the #developers are the only ones changing, cloud native is not gonna work.

We have this organisation with so much friction: there is a real cost. Developers will leave.

but governance is there for a reason because …

cloud can be expensive

The cloud makes it so easy to provision hardware.

That doesn’t mean the hardware is free.

Often we provision something and they stop being useful, but we forgot about them -> it has a cost

Hey boss, I created a Kubernetes cluster … I forgot about it … 2 months later I realised it cost 1000 USD per month

-> financial impact as well as a climate impact

=> that is why there is governance

There is surely nothing quite so useless as doing with great efficiency what should not be done at all.

the cloud makes it very easy to provision something, but when it is not needed, it is very useless

we have no idea how much we’re spending on cloud

Ops in the cloud is harder

make releases deeply boring so that we can do them often

But our use case is special …

there are some use cases that are genuinely special, for instance space

we couldn’t get the automated checks to work, so we bypassed them

the machine code had an extra zero, the linter would have caught it, because it was broken, the engineer bypassed it and send it straight to the space probe, everything seemed to be working properly except the arms with solar panels that were supposed to follow the sun were not rotating, they only discovered that when the probe ran out of battery, once it was out of battery, anything they would send the probe would revive it

here there was no recoverability

Ways to succeed at Cloud Native

If you automate something, change the processes around it that assume that the previously manual process is expensive and error prone.

=> Cloud Native is a good opportunity for Value Stream Mapping

=> look at the whole release process

=> avoid doing a whole bunch of optimisation in one area that are local optimisations, it will not give us the outcomes we want

The objective is: Optimise the system as a whole