If you are a developer you are probably working on a large and complicated codebase. Unfortunately a lot of existing code lacks automated tests and adding them can be challenging, particularly if the code is old or poorly structured. Testability has always been an aspect of architecture that people have said is important but all too often I see this aspect ignored. Approval testing is a technique that helps you to get a difficult codebase under test and begin to control your technical debt. Approval testing works best on larger pieces of code where you want to test for multiple things. Because of this, the architecture of the system is really important for success with this testing technique.

In my experience, investing in testability and setting up automated approval tests will make your testing cheaper and it will tell you more about any possible problems than other kinds of testing. In this talk you will learn about what Approval testing is and what architectural changes are needed for it to flourish.

Unfortunately, I had to leave this session early to prepare for my talk that was coming next 😓

#aotb2022 @Agileonthebeach @emilybache legacy code is like an old cabinet. Everyone has one, it’s probably messy and you probably don’t know what’s in it 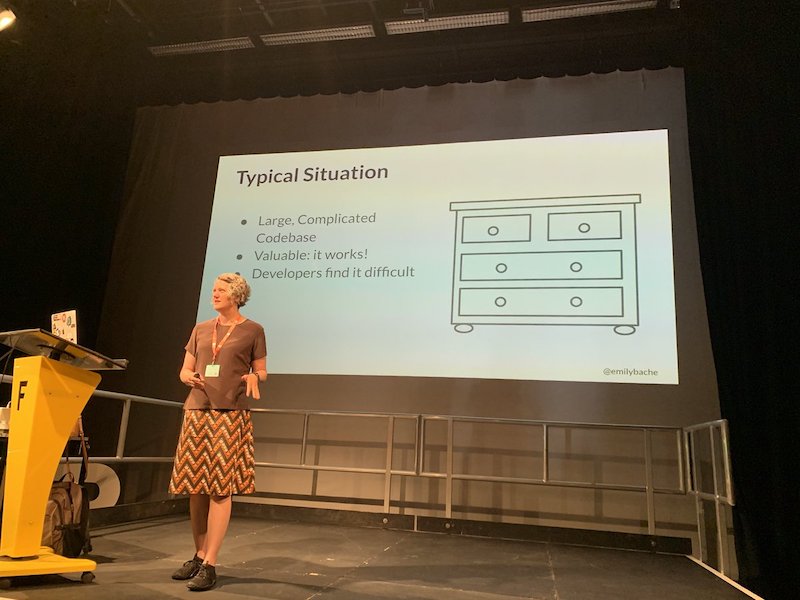 when I say it is a bit messy inside -> Technical Debt

Looking to get into Approval Testing? @emilybache recommends these tools (approvals, touca, verify and TextTest) and strongly suggests you don’t try and roll your own. #AOTB2022

common advice for unit testing: you should only have one assert when having multiple asserts -> you are writing a test in the middle of the pyramid (system tests)

=> replace by an approval test that checks a string output

=> design a reusable Printer instead of assertions

=> test larger chunk of code: anything larger than a unit test

What’s in it for me?

use TestText UI to manage tests (it has a cli, but the GUI is convenient)